The Five Elements explained in a way that is compatible with modern science using the original concepts. 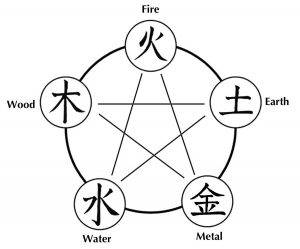 In order to explain and make easily understandable from a modern perspective what Dr Lin is talking about we need to build a basic background of how the ancient and modern relate.  We need to differentiate chi and energy and understand the basics science behind the concept and formula of the five elements system so that it is seen in a practical and sensible way. We cannot forgo this action which must be done step by step so there is no confusion. Dr. Lin’s approach and teaching is not the same as will be found in books commonly available there for although there may be similarities it is not the same. Most books are copies transcribed over a long period of time or have been written by people who have read a lot and then written a book on their accumulated reading. Dr Lin has gone back to the original and then transcribed it into modern perspective. We must approach this with an open mind and not be influenced by past experience.

The Five Elements is a system that can be used to explain, regulate  and heal  the human body in order to maintain health. It is a concept  using five elements or properties that are   actually potential transformations  that have a mathematical   relationship   and can be seen as both real and abstract in nature. They can be used to explain the functions of the system. These functions or elements each contain the ability to transform to each other depending on information received.

The environment we live in and our bodies are known as a thermodynamic system and this is subject to or controlled by entropy or diffusion of energy. This diffusion reduces function and effective operation of the system and  then ill health prevails.

In ancient cultures there was an understanding the this world we live in is part of a much larger system beyond this dimension. They called it Shen Tien or Heaven and this dimension was known as Ho Tien or Earth. This Earth included all thing in  the Universe.

Today in modern science Heaven is called the Fifth Dimension to distinguish it from the four dimensions we live in.  So what is a dimension?

To make it simple one dimension is a point or straight line that has no width or breadth, so cannot really measured and does not exist in our reality. A two dimensional space is two points that can be joined and measured but have no width or depth, some times called a membrane or just a brane.

The Chinese in ancient times researched the I Ching or Book of Potential Transformations and  went beyond our world of four dimensions to find a higher dimension or 5th dimension which controlled  our universe. The 5th Dimension continuously organizes the earth and the Universe. It creates the necessary properties and information co-ordinates it and then transfers it to the 4th Dimension which then appears as our world.

This transfer of information is done through what they called Chi. So Chi is an interface between the 5th Dimension or Heaven and the 4th Dimension, Earth. However the world we live in has many diverse and complicated actions, functions and processes. A simple system had to be made to explain how to control and balance the larger scenario.

The world we live in is holographic and therefore any tiny part is representative of the whole system.

The Five Elements represents the complicated  actions of the whole system in a relatively simple way.

This is known as a perturbation theory.

These system consists of five elements or properties. Each one has the potential properties of the other and can influence them in a positive or negative way. The system needs to have central equilibrium to work optimally. This system describes energy production and transformation and is known as a thermodynamic system. Energy cannot be created or destroyed but only transformed because we live in a closed system. So the five elements describes transformation in a closed system and the changes are due to new or different information being transferred from the 5th dimension to the 4th dimension or the changes may be from events on Earth. The changing season are a good example of this. A tree changes with seasons from green in Summer and full of leaves, to brown in Autumn and leaves dropping off. In Winter the leaves are all gone and the branches , bare and dark and the in Spring the leaves start to grow green again until in Summer it is full and green. It is the same tree all the time but just being subjected to changes.

We live in an active energy system and are therefore everything is in continuous motion.

The inhabitants and things of our world are subject to a law known as the second law of thermodynamics. It says that energy of all kinds in our material world disperses or spreads out if it is not hindered from doing so. Entropy is the quantitive measure of that kind  of spontaneous process : how much energy has flowed from being localized to becoming more widely spread out.

The five elements system is a way to control that entropy so that the entity does not lose cohesion with information for existence coming from the 5th dimension.

If entropy becomes out of control or chaotic there is disfunction, physical and mental and rapid aging. If people do not get proper nutrition there cannot be proper protein folding and hormone production and the system fails. The body is a chemical action factory and is in constant motion, that action comes from a constant supply of nutrition.

Energy is a chemical reaction between atoms and molecules that causes heat to be created and usually expansion and then the contraction of cooling. The reality we experience is extended from a two dimensional field into three dimensional reality. To move an object through the field requires energy and chemical actions. Energy also drives the body functions. The information for energy creation and function comes via this two dimensional field or the Tan Tien. If the entropy of a system is out of balance then there will be chaos. Diabetes is an example of a loss of control if information from Shen Tien for body processes. Entropy is a measurement of the thermodynamics of a system. The five elements is about how to balance and maintain the thermodynamics of a system so that change, transformation , Yin and Yang, creation and annihilation, takes place smoothly and in equilibrium.

At low energy levels, low entropy, our bodies tend to move closer to the field. So when practising Tai Chi we try to be still and reduce energy usage to become in one with the Tan Tien.

The information coming from the Tan Tien comes in waves, as a wave is the best way to transmit information. But when wo observe it’s action it is transformed into a particle and we see objects or living things which are made up of many particles. Particles are tiny basic building blocks of atoms which then make molecules and then cells and then living things. The information on the waves changes with with time and gives us the seasons and climate and these changes give us time and aging.. On an individual basis there is also feedback to the field which affects future action and causes evolution.

The five elements is how to balance and maintain the entropy and thermodynamics of a system.

In our bodies the Five Elements of five chi are at Pai Hui. So in Tai Chi we use the five chi at Pai Hui to suspend.

Our body is a closed system and when it is shocked out of equilibrium then we become sick. Energy transforms and becomes a flow. Fire and water together in harmony become a flow. If energy creation is too much in one part of the body then it will be weak in another.

The core of chinese medicine is Consciousness and  Chi (interface)  which together create energy.

Consciousness and Chi give rise to the body and sensation and then, through the meridians, action.

This then feeds back to consciousness and it then gives correction back to the body and this process is linked to the central nervous system which is constantly checking the body for necessary adjustment.

In using the five elements we do not want to be too exact, we must be a bit fuzzy, just push to correction and then allow the program to carry on.

To illustrate this we can use the nine Gua. Push to hard on one and the others go out of balance.